A lot of photo apps allow you to add filters before sharing. The typical UI for picking a filter is a row of little thumbnails that can be horizontally scrolled. I’m sure you’ve used it many times. It looks something like this: 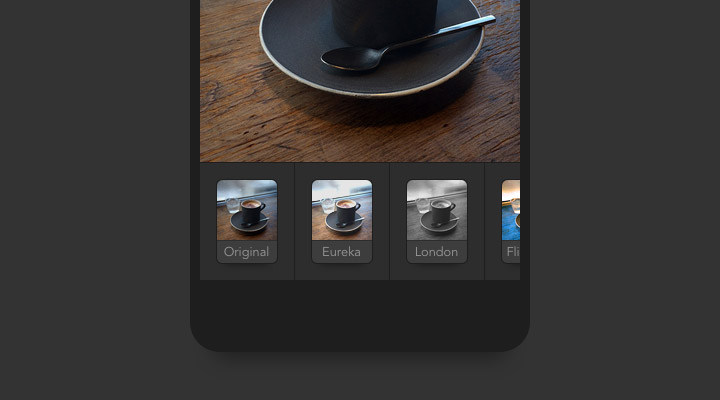 A filter picker like that is easy to understand and works pretty well. But in my case, there is something that has been bugging me a bit. Here is how I use it:

Now, I don’t really know how most people use these filter pickers. Could be that:

So I was thinking about some possible improvements:

Automatically order the filters based on how often they get used. This makes filters that you use most appear at the beginning and are easier to get to. You could always keep scrolling in case you’re in the mood for something new. This would of course mess it up for people that have filters remembered by position. But not sure how many actually do that.

Let people manually reorder the position. Could be done similar like the home screen icons on iOS (long press until they wiggle, then drag around). I would probably move my favorites to the front and also sort based on color/style.

Let people temporarily toss away the filters they don’t want. This would allow you to narrow down your selection to just a few for easier comparison. Of course, all the filters would be back next time you take a new photo.

Or probably even better (3B): Instead of throwing away the ones you don’t like (could be tedious if there are a lot of filters), you could push up only the ones you like and they would move to the right with a visual separator. It’s similar how you can pin a Chrome browser tab to separate it from the rest. Then once you scrolled to the end, you would have all your previously selected filters next to each other, waiting to be the lucky winner.

I understand that the suggestions might make a photo app more complicated and harder to explain to a new user. But it could be more a “power user” feature that you’re not forced to use if you don’t want to. Anyways, in case I’m not the only one with this (small) problem, I hope some day we will have a better way to filter filters. Ohh.. and let me know if you’re already using an app that tackles this somehow.

Thanks for all the comments. Good to see more people thinking about this. I played around a bit more with the demo, mostly after the conversation with Ignacio in the comments below. So here a 4th option:

Let people select a couple filters and then cycle through them by tapping on the photo. It’s actually similar to 3B, but it keeps the UI simple by using the photo as the secondary navigation control. Here the steps how to use:

The implementation of the demo could still be improved. It is a bit hard to discover that you can tap the photo to cycle through your favorites. Might need some visual clue to help understand it better. Adding swipe gestures instead of tapping would also improve UX. Or to remove a filter from your favorite selection, you could just swipe down on the image. Also note that the filters are CSS based and still a bit glitchy when animating. But you should get the idea.

Manuel Haring explored a similar concept where you can push up filters to narrow down your selection.

Here a larger video that has even a third selection stage.